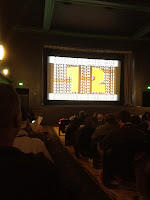 Here we go with the next batch of reviews from The 2012 Sundance Film Festival! If you haven't read the first batch, click HERE. Today, I'm going to review two features and two shorts. Away we go!

The best part about Sundance, is the wide variety of documentaries that play every year at the festival. In a given year anywhere from fifteen to thirty documentaries play, so there's a better than average chance that no matter what you are into, you are probably going to find something that piques your interest. With the special access to the directors through the normal post-screening Q&A sessions, you can get even deeper into the subject at hand than even what's on the screen.

I've been getting into Stanley Kubrick a lot lately. The guy had a fascinating career which lasted 48 years, but yielded only thirteen feature films before his passing in 1999. With incredible, sometimes bizarre imagery, experimental camera angles and bombastic storytelling, I almost look at all of his films as a work of art. Even Eyes Wide Shut. Hey, it was still nice to look at. The man built a reputation as a man with such incredible attention to detail, that almost nothing that ended up in his films was the result of an accident.

Such a reputation can lead one to almost see things that might or might not even be there, and almost nowhere in Kubrick's cannon outside of 2001: A Space Odyssey raises as many questions as his interpretation of Stephen King's classic tale of a family's descent into crazytown, The Shining. That's the subject of Rodney Ascher's documentary Room 237. He interviewed five Shining conspiracy theorists and weaved their story together in nine chapters. It was an exhaustive film to watch, but fascinating as well. Probably not for the reasons you're thinking, though. I'll expand on that a little later though.

One theory put forth is since there's a ton of Native American imagery in the film (anything from paintings on the wall, an abundance of Calumet baking powder in the pantry, various rugs and the fact that the famed Overlook hotel was supposedly built on a burial ground) and yet no actual Native American characters, then The Shining is merely a commentary on the American government's marginalization and mistreatment of the Native American people. Yet another keeps seeing the number "42" everywhere and also noticed Jack's typewriter was made by Adler, a German manufacturer. He posits that the film was a commentary on Nazi Germany and the holocaust.

The most bizarre theory though was posited by a guy named Jay who insisted that The Shining was Kubrick's way of confessing to the world that the United States faked the moon landing, and he shot the footage himself! He posits that they changed the name of the evil room from the book's 217 to 237 because the moon is 237,000 miles from earth (it's actually closer to 239,000, but don't let that stop you, Jay). He also notices that the carpet outside Room 237 where Danny is playing with his trucks looks like the Cape Canaveral launch complex. And of course, when Danny stands up, he's wearing an Apollo 11 knit sweater. I don't know about you, but I'm convinced.

Other things thrown out there include the foreshadowing of Jack's horrific necrophiliac sex scene because the carpet of Room 237 resembles weens and vajeens. Another lady sees minotaurs around every corner. And of course, the only one that make even a lick of sense, that all the changes from the book that Kubrick brought to The Shining film was all pretty much a big "fuck you" to Stephen King. I'm a huge fan of famous people pissing matches.

To me though, the 800 pound gorilla in the room and the subject that wasn't even touched in the Q&A (I didn't get to ask my question) is the fact that this isn't a film about The Shining. This is a movie about obsession. The folks interviewed for this film are more obsessed with it than I've been obsessed with anything in my life. Listening to all of these interviews, it seemed obvious to me that all of these people are at least one taco short of a combination plate. Ascher said that all of his content was gained through phone interviews and emails. We never actually meet or see any of the subjects and I'm pretty sure if we had, just about everyone else would've come up with the same conclusion that I did. These are all crazy people. But in a way, I'm kinda glad that the documentary let me come to that conclusion on my own. Like The Shining, I guess it's all up to interpretation. If you like The Shining, you'll like this flick. And if you read Psychology Today, you'll like this flick. ~ Rating:  7 Heeeere's Johnny's out of 10

AND NOW, A SHORT REVIEW OF A SHORT:

LAZAROV:  In Soviet Russia, dead, skinned chicken shocked back to life peck YOU! What a country!

Whoa! This one was fun. The night kicked off with the director, Richard Bates Jr. asking the audience to sing "Happy Birthday" to his producer. Then he gave the entire audience one of those Red Lobster cheese biscuits. Some real bigwigs must have been in the crowd for the midnight screening on the second to the last day of the festival to warrant that kind of bribery! He excitedly introduced the film and we got started.

This flick centers around a semi-frumpy high school girl named Pauline. Pauline is a little different from the other kids at school. She has these bloody, bizarre sexual daydreams that she discusses with her therapist/priest, played by John Waters. She asks weird questions in her sex-ed class and has a very antagonistic relationship with her math teacher, played by Malcolm McDowell. In fact, she doesn't really treat anybody, save for her sick sister Grace, with any respect at all. Kind of reminded me of the kid in Bobcat Goldthwait's instant classic, World's Greatest Dad.


That being said, Pauline doesn't exactly get a very nurturing environment at home. Her mother, Phyllis, played by former porn starlet Traci Lords, in what could be a career defining role (if all that other stuff didn't define her career first), is the very definition of your stereotypical right-wing, ultrachristian, domineering mother that roams your nightmares. She completely dominates her husband, played meekly by Hostel II's Roger Bart. Phyllis is so driven to make Pauline into a "proper lady" that she results in pushing her further and further down the proverbial rabbit hole. Pauline's behavior got progressively more bizarre as the film went on, resulting in a climax that was so strange, that it must be seen to be believed. I can't even begin to describe it. Just think of four words, "surgery in the garage."

One of the things I wrote in my notes as the film progressed was that every known actor, save for Malcolm McDowell, seemed to be playing against type. AnnaLynne McCord looks nothing like a 90210 princess. John Waters as a priest? Yeesh! And then there's Traci Lords who is an absolute tour de force here. Very reminiscent of one of my favorite horror flick performances ever, that being Piper Laurie in Carrie. Hopefully, this will open some doors for her, because, believe it or not, she is a pretty capable actress. This movie was fun and some of the images will stick with you.  ~ Rating:  7 Red Wings out of 10

AND NOW, ANOTHER SHORT REVIEW OF A SHORT:

ONCE IT STARTED IT COULD NOT END OTHERWISE:  Bunch of high school yearbook photos superimposed over pictures of what looks like an abandoned mental hospital zoom across the screen while creepy synth music plays. Kinda sucked.

I'll wrap up my Sundance coverage in a couple days!  Let me know what you think!