Typically my Winters are kind of a dreary time for me. The weather puts a damper on business so I typically have an abundance of time off. As you know, "idle hands do the devil's work," so I often spend a good chunk of January and February doing things I probably shouldn't be doing, causing possibly irreparable damage to myself in the process. But every late January, a little culture invades our area of the country and shakes things up a bit, and I look forward to it every year. I'm talking about the Sundance Film Festival.

The Festival kicked off this past weekend here in Salt Lick and up in Park City, bringing with it, it's share of celebrities, what passes for "musicians" these days, starstruck onlookers and grumbling locals that hate anything different coming their way. I first started going to the festival way back in 2004 when my buddy Nick and I attended the documentary premiere of Metallica:  Some Kind of Monster. Say what you will about the film's content or subject matter, but this was a totally different kind of movie watching experience. There were no screaming kids, everyone was polite and the filmmakers, Joe Berlinger and Bruce Sinofsky (the cats that produced the Paradise Lost trilogy about the West Memphis 3) actually gave their own insight before the screening and had a Q&A session after it was over. The ability to interact with the people "making the sausage" if you will turned me from just a casual fan of movies into a guy that was very interested in the whole process of film making and the stories behind it.

In subsequent years, I've added the amount of Festival films screenings that I've attended. I tend to avoid the "big" premieres featuring your typical Hollywood megastars. There's a better than average chance those movies will secure wide distribution and you'll be able to see them anyway. Instead we typically shoot for documentaries and weird, quirky, and often times pretty gruesome films that aren't likely to reach a wide audience any time soon. Sometimes, they're great, I Saw The Devil, a Korean revenge movie, was the third best movie that I saw all of last year. Sometimes, not so much. The Oregonian might have been the shittiest film I've seen in my entire life. Last year, with my buddy VodkaRob and my sister, I attended four features that were paired with three shorts. This year we're due to see six features this week. Here's a quick preview. I'll be doing reviews of each after it's all over.

Official Description:  Sara invites her childhood friends Abby and Lou, on a reunion trip to a remote island in Maine. There will be laughter, tears and boozy catharsis. It's the sort of weekend that can transform the three into fully realized, grown-ass women. You already know this movie right? Wrong.
Emotional release will come, but this is no weepy ballad of reconciliation. Working from a script by her husband, Mark Duplass, Katie Aselton returns to the festival with a taut, satisfying thriller. As the danger rises, the gorgeous cinematography transforms the bucolic island into sinister and formidable terrain. Kate Bosworth, Lake Bell and director Aselton capitalize on the material and deliver remarkable performances, imbuing moments of unbearable suspense with raw emotion.
So get your chick-flick jollies somewhere else! The women of Black Rock have to confront something far more dangerous - and heavily armed - than their feelings.

My take: Wasn't terribly excited about this one until I saw who put it together. I'm a huge fan of the highly crude, yet fucking hilarious show on FX called The League. And both director/star Katie Aselton and writer Mark Duplass are two of the anchors of the ensemble cast of that show. So this is worth taking a flyer on based on that alone. And hey, Bosworth played Lois Lane, so she's got that going for her. 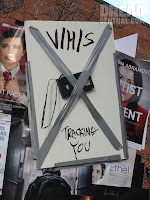 Official Description:  When a group of petty criminals is hired by a mysterious party to retrieve a rare piece of found footage from a rundown house in the middle of nowhere, they soon realize the job isn't going to be as easy as they thought. In the living room a lifeless body holds court before a hub of old television sets, surrounded by stacks upon stacks of VHS tapes. As they search for the right one, they are treated to a seemingly endless number of horrifying videos, each stranger than the last.

My take: It seems like this one is right up my fucked up alley. I love the weird stuff. There are two red flags though. First, there's SIX directors. Could be a case of too many cooks spoiling the soup. And then there is the involvement of Calvin Reeder, the "visionary" behind the shittiest film I've ever seen, The Oregonian.  Could be trouble.

Official Description:  Have you ever seen a hidden message?
In 1980 Stanley Kubrick released his classic horror film, The Shining. Loved and hated in equal numbers, the film is considered a genre standard by many loyalists, while others viewers dismiss it as the lazy result of a director working far below his talent level. In between these two poles, however, live the conspiracy theories of ardent fans who are convinced they've decoded The Shining's secret messages regarding genocide, government conspiracy, and the nightmare we call history.

My take: Kubrick was awesome. The Shining is awesome. A documentary about Kubrick and The Shining has got to be awesome, right?  We'll see. 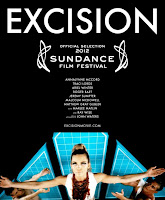 Official Description:  Pauline isn't your typical teen. She picks scabs, dissects roadkill and fantasizes about performing surgery on strangers. Her fascinations disturb her parents and her classmates. Pauline reserves special disdain for "the church" and her "therapist," Reverend William, who, in Pauline's mind, is in no position to judge, or indulge in, her psychosexual fantasies. No one understands Pauline except for Grace, her younger sister, who suffers from cystic fibrosis. An outcast at school and at home, Pauline decides she is ready to lose her virginity...and this is where the weirdness really begins.

My take: HOLY SHIT!  LOOK AT ALL THE BLOOD! Plus, you've got the involvement of John Waters and Traci Lords. Should be awesome. Evidently this one has been making the festival circuit for several years now and just now made the Sundance cut. So who knows how much they had to punch it up to get it in.

Official Description:  Annie returns home to attend her much-despised mother's funeral as a favor to her older sister. Sleeping in her old bedroom, Annie senses something unfamiliar in the house. She enlists the help of a local cop and a clairvoyant to answer some questions surrounding her mother's death. As long-repressed nightmares begin to haunt Annie's life again, an unsettling presence emerges in her childhood home.

My take:  This film debuted at last year's festival as a short. It played before the aforementioned The Oregonian and completely blew it out of the water. There wasn't time for your normal horror movie payoff, but the tension built up in the short was insane. I'm pretty excited to see a fully fleshed-out version of that film.

Official Description:  Refusing to accept the decline of the USSR, a handful of Russian scientists work secretly to resurrect Soviet power through the mysterious program, Lazarov.

My take: Hell and yes. This one is paired with Excision and from the short trailer I've seen, it looks like an entry into the "found footage" genre. The holy grail of which is stuff from behind the Iron Curtain. For a good example check out Metallica's music video for All Nightmare Long. The movie is only five minutes, but it looks pretty cool.

ONCE IT STARTED IT COULD NOT END OTHERWISE

My take: Short and sweet.  Might be good, it might suck. They don't give us a hell of a lot to go on here.  It screens with The Pact.

So there you have it. This is going to be a very interesting week of movie watching.  But like I said before, it's not just the entertainment value that makes these screenings worth it, it's the educational insights into the independent film-making process and the interactivity with those involved in making these films that make this festival a "must attend" event year in and year out. For my Utah friends, I encourage the hell out of you to get out and see some of these movies. The vast majority won't see the light of day otherwise. And it's only fifteen bucks a feature, which isn't all that more expensive than a usual night at the movies anyway! The American version of Cannes is in our backyard folks, give it a shot! Reviews coming up next week!
Posted by Nickas! at 3:48 PM 3 comments:

Email ThisBlogThis!Share to TwitterShare to FacebookShare to Pinterest
Labels: At what point do I just buy a pass to this thing, Movie Previews, Snow blows, Sundance, Violence
Newer Posts Older Posts Home
Subscribe to: Posts (Atom)