Flashing back a few years...

Okay, this first one is from a few years ago. This is the first time that I ever really described in writing one of the two main reasons why I love the game as much as I do. I'm not the most religious guy in the world, but I definitely felt something otherworldly. Or maybe the wind finally quit blowing down there, who knows?

(Originally published on the old blog back in November of 2005)

It's been a really weird year. Financially, it's been decent, but I'm still barely above water. Like idiots, my sister and I re-upped for another year in our apartment. It's the kind of place that I'm pretty sure any building inspector worth their salt would probably condemn on the spot. Our landlord is a total asshat. But the location is too convenient to leave. I worked pretty hard on fixing things up inside and trying to make it nice. But the end result is a beautiful crumbling mess. It'll get better.

Business was pretty good this year. Shop work was pretty much the same as it always is, but despite being crippled by a no-compete lesson policy that prohibits me from advertising my rates, I've actually made a few new lesson clients this year and have really improved as a swing teacher. Hell, I even taught a semester of an actual "for-credit" golf class, which probably makes me the worst former college student on record ever to actually teach for a major university. Da Professah! I even managed to win a few bucks in tournaments this year, although I was a major under-achiever in that department.

Now on to the meat and potatoes of this episode of "Confessions." I recently returned from a weekend getaway to Las Vegas with some folks I met on my vacation last year out in Hollywood. Had a hell of a great time out there with the Cracker, Nate, Cross, Gray, Desiree, and Renee. Drank more than should be legal, lit some cash on fire playing the slots, and made one of the greatest blackjack comebacks of all time to come out ahead a whole dollar! Saw the shark aquarium at the Madalay and some Muay Thai Kickboxing which was some brutal shit. May the Westward Ho rest in pieces. Their $2 margarita was quite simply the greatest liquor value known to man. It was kind of refreshing to be able to walk around on the street with a drink, compared to Utah where you can only drink in a basement with the lights turned off. The Bears won and I still lost my bet. But it's little sacrifices like using my shitty luck to propel them to victory that make a playoff contender! The Fremont Street Experience was the freakin' bombola!

The last time I visited Sin City was waaaaay back in December of 1996! That was the last time my family ever took a road trip/vacation together. On that trip, I was kind of in my "retreat inside myself" phase so I pretty much wandered the strip by myself or with my buddy Curtis the whole trip. Pausing only to eat breakfast and dinner with my family, I had a damn good time. Even won a couple small jackpots. Much like now, I looked a hell of a lot older than I was. Hell, I was just a senior in high school! As an icing on the cake, I returned home to find out I was seemingly the only person in the whole debate club that wasn't suspended that week due circumstances surrounding what ended up being pretty much the only tournament weekend I didn't attend in two years! Funny shit!

Unfortunately, I've got some serious regrets about that trip. Little did I know, my family was crumbling all around me, and my ass was just too much of a space cadet to realize it. This was probably the last opportunity I would ever have to have some quality time with my sister, mother, and father all together. Three months later, my mom split town on us and threw my life into a tailspin. It seemed like everything I had ever believed in my life was now bullshit. For awhile I completely withdrew from everything, save for a small group of friends and my dad. At first I was bitter, and pissed off, throwing blame around like any ignorant teenager probably would.

Then one day, the following summer I was out by myself playing golf at good ol' Carbon Country Club. As was typical at the time I was thinking about what a mess I was. It was late in the day, right around dusk, and the course down home seemed completely deserted. I striped my tee shot down 18 and walked to my ball. When I reached my ball, I had a good look around and something weird happened. I noticed the grass was the most beautiful shade of green I'd ever seen. The sand in the trap seemed pearl white, even though it was the same shitty sand we'd always had. The clouds in the sky looked to be on fire as the little remaining light cast what seemed to be the air around me in the most surreal shade of blue. The scene gave me pause, and then for the first time a sense of total calmness came over me as all the chaos and strife in my life seemingly lifted away. It was almost like someone or something else was there standing next to me letting me know that everything was going to be all right. Then I stepped up to my ball, and shanked it straight into the weeds. But you know what, I didn't care, because I was in a good state of mind. Things were going to be all right.

Now, in the years since, I've certainly had some ups and downs. But ever since that day I've been chasing that feeling again. That's kept me around golf more than any reason. Just so there's a chance I might feel that indescribable presence and feeling of calm again. I'm telling you it felt better than any over the counter, prescription drug or liquor I've ever had. Who knows what it was, but I'd love to feel it again just one more time. 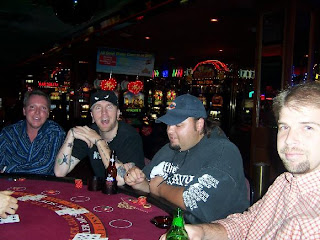 Email ThisBlogThis!Share to TwitterShare to FacebookShare to Pinterest
Labels: Debauchery, Good times, Rehashing old shit, Vegas, What Jules Winfield referred to as a "moment of clarity"